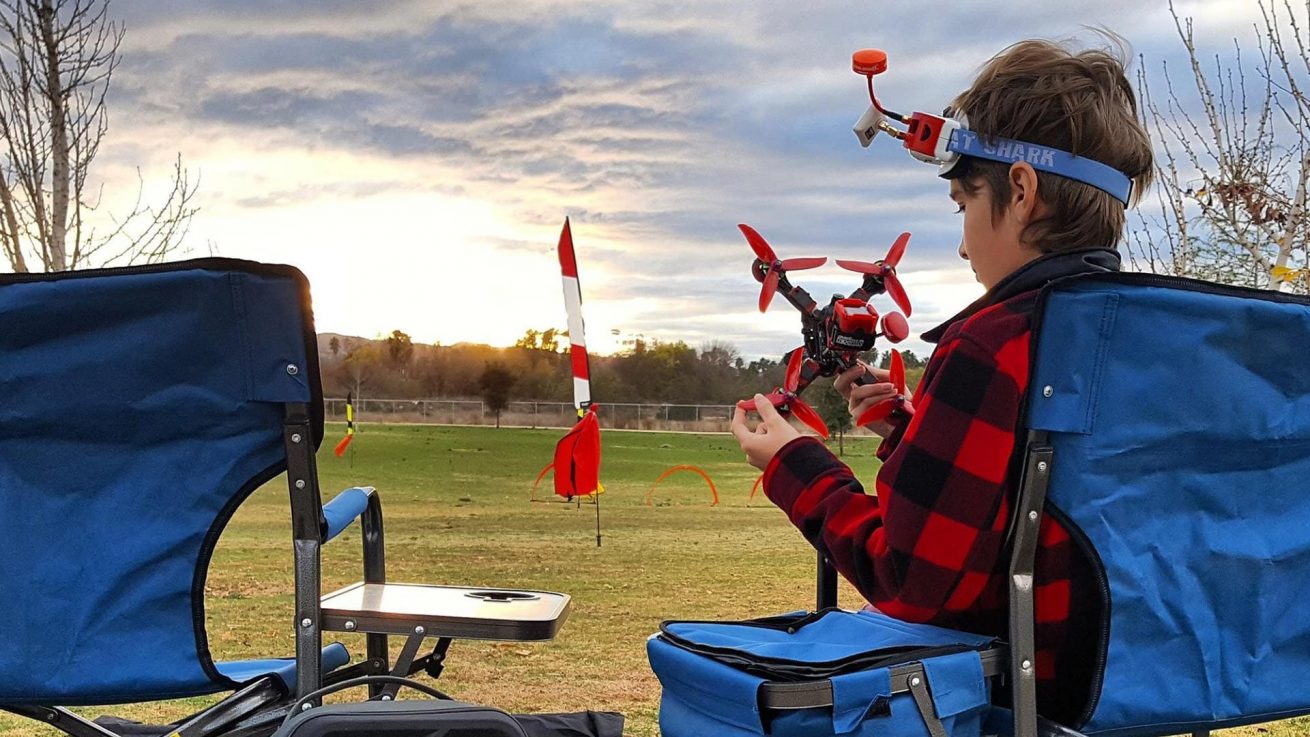 At 11 years old, how much of your life did you have figured out? Tying your shoes? sure. Chasing your crush around the playground? On a good day. How about having your career path picked out, and already being one of the best at it? Probably not.

Meet Ashton Gamble, who goes by the pilot name “Drobot Racer.” With just over a decade of life experience, he’s already done more than most in the world of FPV. Most recently, he took 1st place in the Ventura County FPV Racers regional qualifier in Oxnard, California. The top 9 from that qualifier are automatically entered into the MultiGP 6B Regional Finals, taking place later this summer. The race featured some of Southern California’s fastest pilots, and they just couldn’t keep up. To make his story more unbelievable, he’s only been flying for a little over a year. But as is the case with everything, practice makes perfect; he’s also got a secret weapon: his dad, Rand. When it comes to racing quads, the two are inseparable.

Even from their comical entrance into the world of drones.

For them, it all started with a Solo, and some friendly neighbors. The dad-drobot duo was flying around their neighborhood one day, even before Ashton got big into racing. As some beginner’s stories go, they crashed it into someone’s backyard. In true character, they went door to door. As Rand tells the story, “We went into 10 people’s houses…complete strangers in L.A…Ashton was my Golden Ticket in…we saw some pretty crazy stuff! Then coming out of one house Ashton notices the drone – in about a hundred pieces – on a house’s roof. We are happy that everyone was safe “.

From that point on, Ashton was hooked. And even though his dad doesn’t race, he wanted to be a part of the amazing journey. So they found a field. Not just any field, but an overgrown field populated by homeless people. Just like any other challenge, Rand and Ashton found a quick solution. First, they made friends with the homeless camp, often times bringing them food and sharing stories. Then, they tackled the track. It took Rand 3 days with a weed whacker to carve out an Indy 500 style track, and in no time, Ashton was ripping it up.

It eventually came time to upgrade his equipment. So once again, dad went to work. Without any real quad building experience, he built an EMAX X5 from scratch, all while on vacation! His family couldn’t understand why he was staying inside their whole trip; but that’s how much Rand loves seeing his son in the air. Within a day, the quad was up and running; maybe a little too well. When Ashton accidentally gave it throttle, the propellers nearly took off his dad’s finger! As Rand likes to say, “OK, that can not happen again…We need to figure this out (setting up the disarm switch)”. Using his programming experience, he set up a two-stage arming sequence on Ahston’s Taranis radio to avoid future accidents.

When Ashton started racing, he chose the “slow and steady” style. He would try to stay in the air, always finishing laps, not trying to push it full throttle. That strategy lasted him the first few months. Until he went to Sebring, Florida. In January, 120 of the fastest pilots descended on a small, live airport in Central Florida. One of those, Ashton’s icon and multiGP Champion Shaun “NytFury” Taylor. Racing with and against Shaun quickly became one of the highlights of his growing FPV career; Ashton finished 9th, which was higher than Shaun! Being at Sebring taught Rand one thing, we need to push it! So, since January, that’s what they’ve been doing. Rand built a track in their backyard and added elements where Ashton can push it full throttle. Now, he’s eating his fear of crashing and whipping through gates and turns. In other words, don’t expect to catch up to him anytime soon!

What’s it like at home with this future All Star? For starters, school still comes first. If he’s not getting good grades, he isn’t flying. But as dad says, that’s never a problem for this ace student. Ashton’s also into video games, which gave him a good starting ground when he first started FPV. Ashton is also the third generation of model aviation pilots in the Gamble family. In high school, Rand was given a box of model RC plane parts and built, then crashed, every single one, but one. His grandfather is a Vietnam Vet. In his down time during the war, they used to fly control-line models airplanes (model airplanes that were controlled by a cable that the pilot held in their hand).

So is that what makes Ashton, aka Drobot Racer, so deadly on the track? Or is he just an FPV freak of nature? Either way, keep looking up, because that’s where you’ll be finding him, on top of the leaderboard!

Written by: Jesse A. Friedman

MultiGP is the largest professional drone racing league which hosts frequent competitive gatherings and casual events within its network of over 500 active MultiGP Chapters and 16,000 registered pilots world-wide. MultiGP nurtures its Chapters by providing tools, guidance and community to make drone racing fun, organized and rewarding for pilots, Chapter Organizers and spectators. Programming such as the National Championship, Regional Series, International Open, Universal Time Trial Tracks and Chapter Tiers are designed to allow the drone racing community to compete in an easily accessible yet structured format with the goal of progressing the sport. MultiGP is the Academy of Model Aeronautics Special Interest Group for First Person View (FPV) Racing. For more information, go to www.MultiGP.com

To learn more about MultiGP drone racing, and how you can get involved, join us on Facebook –https://www.facebook.com/groups/MultiGPCommunity/ and on Twitter – @Multi_GP