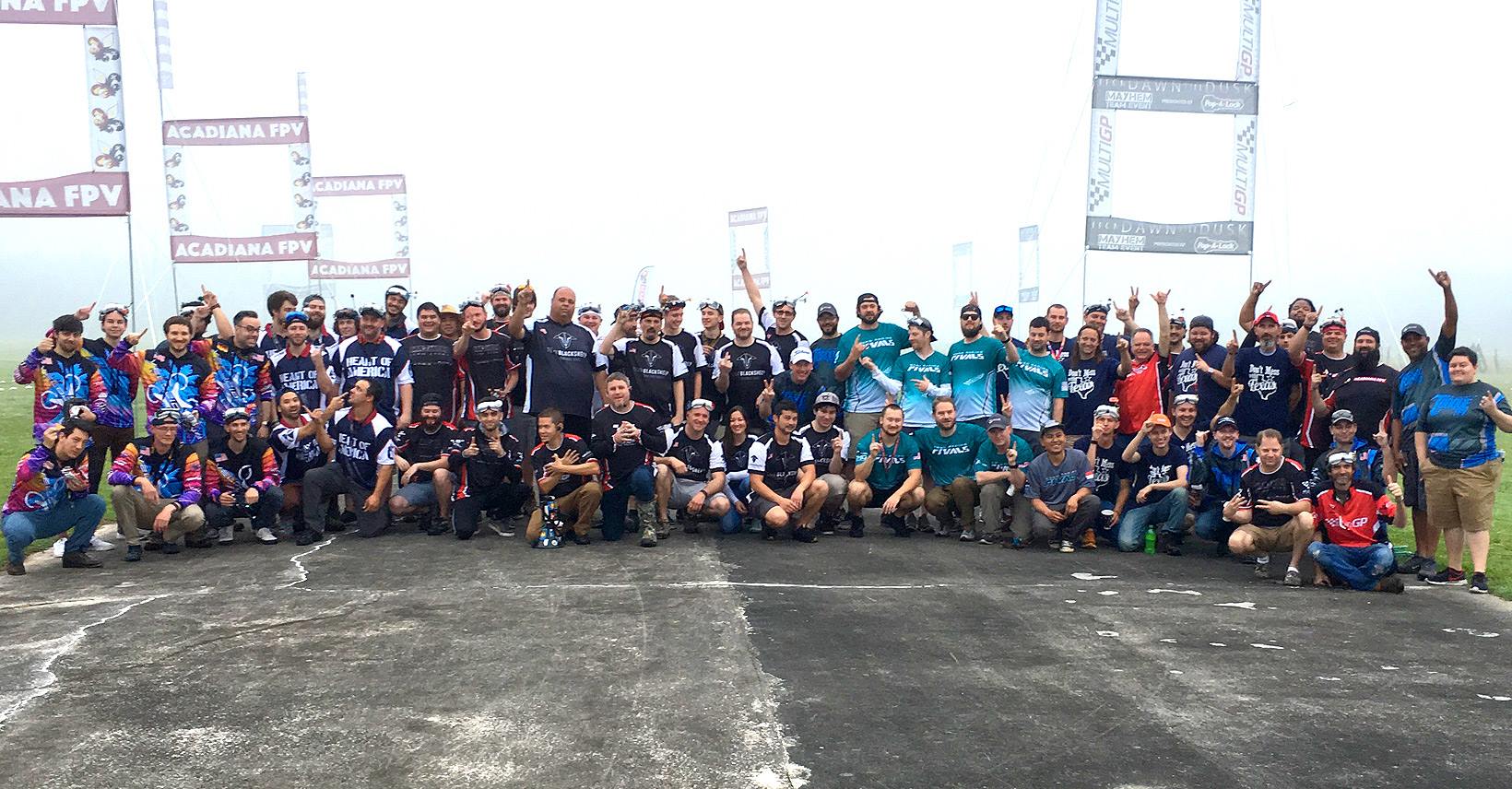 On Kelly Field at the New Orleans Model Aviation Club in Avondale, Louisiana, history was made April 6th, 2019. The largest Team Race of its kind, the Mayhem Dawn to Dusk presented by Pop-a-Lock (New Orleans and Baton Rouge) shattered any previous records set by any previous event as 61 Pilots spanning 8 teams competed in the world’s first 12-hour enduro-style relay first-person view drone race.

What started as a foggy, overcast morning of drone racing ended with major battles for 1st and 2nd place and 4th and 5th place. MultiGP Founder and CEO Chris Thomas calculated the digits:
5,690 Laps resulted in 1786 miles flown, an estimated 1,978 batteries used and a minimum of 316 crashed-laps over the intense morning, noon and evening by 61 pilots and 297 drones.

Most surprising was whether the event would happen at all. Monitoring the forecasts leading into the event, rain was prominent. 8 inches of rain fell on the course the two “set-up days” prior, so while host chapter Acadiana FPV, lead by Chapter Organizer Shannon Broussard, were building gates and setting up pit-areas, they were also pumping and draining ponds around the course and team pit areas. Miraculously, thanks to labor and some last minute sunshine on the eve of the event, it became as dry as it could be in a swamp, and the race would move on.

Just past 8am as the fog lifted ever-so-slightly commentator Joe Scully launched the 8 teams “on-the-tone in less than-fivvveeee” and off team Don’t Mess With Texas went and held the lead for hours. After a handful of laps, team Quadblockers decided to attempt a different strategy: save their drones by enjoying coffees in their pit awaiting the fog and dew to lift. During this time, Team Velocidrone held strong in second for the first few pit stops, until Heart-of America settled into 2nd place, and for the first few hours Velocidrone, Quad Rivals and White Goat would trade places repeatedly for 3rd place.

Viewers watched for hours on end across the globe, with the livestream produced by Adrian Schwartzmann and presented by Thunder Power RC, while interacting both in the social media live chats, and gaming along with the HydraFPV App. They would select the order at the next half hour, which team would call the next caution and other “prop bets”, no pun intended.

While the bandwidth was spotty at times in the swamp, also officiating from afar were the “Remote Officials” whom would watch in real-time for penalties, and perform replays for penalties missed or questioned as they happened. Most of the officials, Tim Creque, Michelle Brooks, Paul Flindt and Tom Wright were in their seats from beyond Dawn to Dusk, east coast time, running to replay a segment while enjoying the rest of their day (making quick sandwiches).

In enduro-style team racing pit time is a major factor in the team’s success, and Heart-of-America was dominating the pit times, while Don’t Mess With Texas was dominating the lap times… they would remain approximately 10-15 laps apart. There were a lot of creative pit strategies and techniques across all of the teams, from crashing into soccer nets or elasticized tarps (Quadblockers).

The only breaks would be for team/race director cautions, each team allowed to call 3 x “3-minute-ish” over the course of the event each for drone retrieval or repair (course, drone or otherwise).

Penalties began affecting the gaps as leading teams began overshooting their pits and landing in rival pits, resulting in deductions, plus after the on-site barbeque (that people enjoyed at their leisure while the racing didn’t stop for more than a few minutes in most cases) “speeding into the pits” penalties began to affect the scores as well.

Critical timing issues forced two long cautions. They were caused by a router forcing a network reset, and the timing hardware having its internal clock reset, causing the timing software to lose its references. This issue had never made itself known as there has never been a drone race with timing of over 1 hour, normally a reset is caught up on the next heat, whereas this was one long heat. The lap counts were “rebuilt” by repeatedly pushing the force-lap keys over 3,500 times by Chris Thomas and Joe Scully.

After the Dinner hour, Don’t Mess with Texas was able to re-claim the lead, though Heart of America maintained a mere 5-10 lap deficit, and multiple cautions in their hand to use at opportune times.

Another network issue arose, and while networking equipment was replaced during the caution, teams really began to strategize. While it was “survival of the fittest drones”, Don’t Mess With Texas was leaving their fastest two pilots out to collect laps, so Heart of America re-worked their roster and tightened the pit-stops.

For the Final Hour, it was a hotly contested battle between Heart of America and Don’t Mess With Texas for 1st and 2nd, and White Goat and Quad Rivals for 4th and 5th. Velocidrone had settled solidly into 3rd place and were guaranteed a podium position.

When the final minute was announced at 7:47pm, the teams pushed for the final laps to count, hoping for someone to make a mistake. Yet, the top-5 teams ended as strong as they started, and 4th/5th would finish even in laps, with White Goat finishing just ahead of team Quad Rivals on lap 744 for 4th and 5th podium positions. As stated Velocidrone flew across the line in third with 815 recorded laps. And lastly, Heart of America was able to hold off Don’t Mess With Texas by 2 laps, finishing with 921-laps for the Win over 919-laps in 2nd. 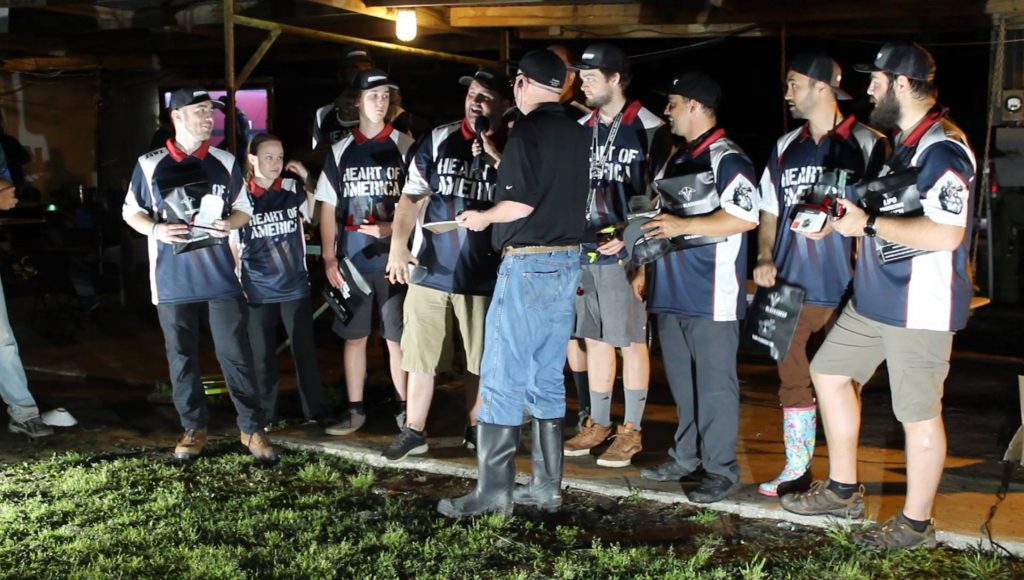 An ecstatic team captain, Shawn Ames, renown for pushing the Heart of America team at major team races such as Sebring 2018, Clash of the Drones Las Vegas 2018 and International Open 2018 finally accepted the 1st place trophy that has elated them, at the most difficult team races of all-time, as they were crowned Mayhem Dawn to Dusk presented by Pop-A-Lock Team Race Champions! 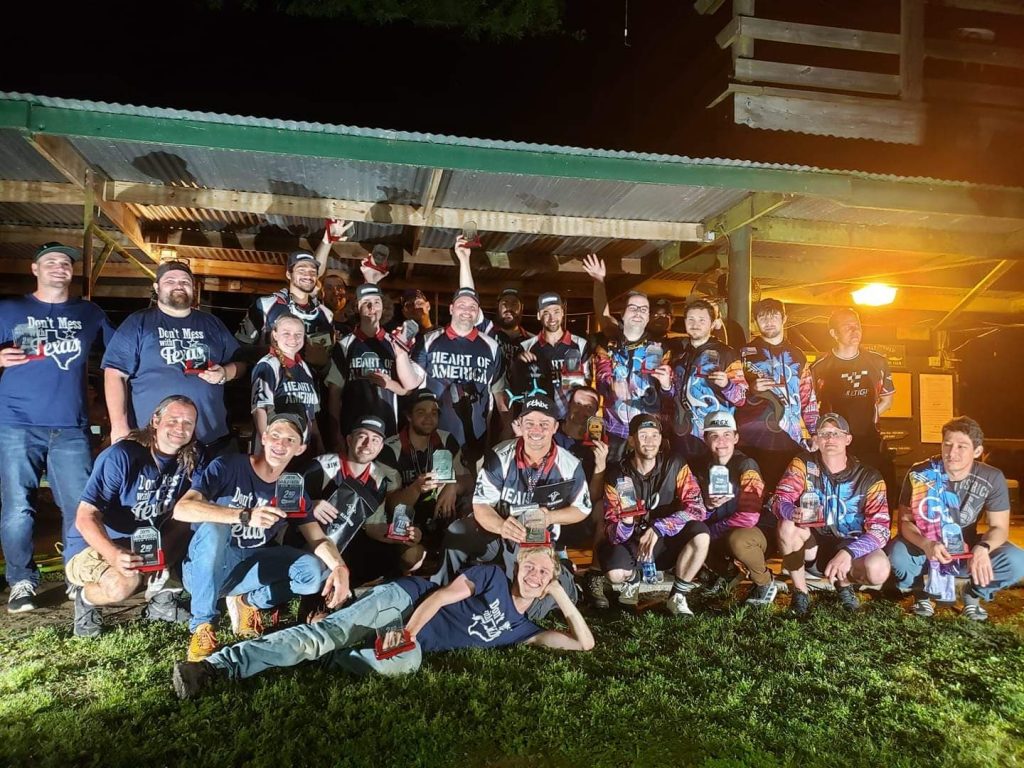 (email [email protected] for corrections, the pilot rosters were handwritten….)

After celebrating a history-making race on legendary Bourbon Street in New Orleans, many of the Pilots and crew returned to Kelly Field on Sunday for Individual Racing and Mega-Class Racing

There were 6 Mega Class Drones at the start, that was narrowed to 4 after the practice round, down to 2 after qualifying, and only one was flyable after grid-ding up for the championship race. Matthew “TickelFPV” Tickel used the final as a victory-lap, ending in an epic crash for the championship.

The Individual MiniQuad Racing went from the field of 38 pilots down to 16 for a Top-16 Double Elimination Bracket.

Top-Qualifier Alex “CaptainVanover” Vanover dropped into the consolation bracket after the semi-final of the winner’s bracket, negating the “IronMan Clause” for Chase-The Ace. He was able to redeem himself and made it into the final-4 for “Chase the Ace”, the new format where the final heat races repeatedly until a pilot wins 2 of the heats.

The big story was Shawn “Shames” Ames who qualified in the 10th spot over-all, was 2nd in the first-round of the Winners Bracket, then was 4th, dropped into the consolation bracket, pulled two more seconds and made it into the final 4.

The first-round of Chase-the-Ace went to Cory “Mewo” Ibanez, the second-round went to CaptainVanover, and then MeWo won the 3rd round to earn top of the podium.

A quick tear-down transpired, with Team Racing Champions Heart of America staying to the end disassembling the gates and then going on an unsuccessful, thankfully, Gator Hunt.

Record setting, incredible and memorable…. with a 4th edition slated for March 2020… get ready for the next Mayhem Dawn to Dusk Team Race presented by Pop-A-Lock!