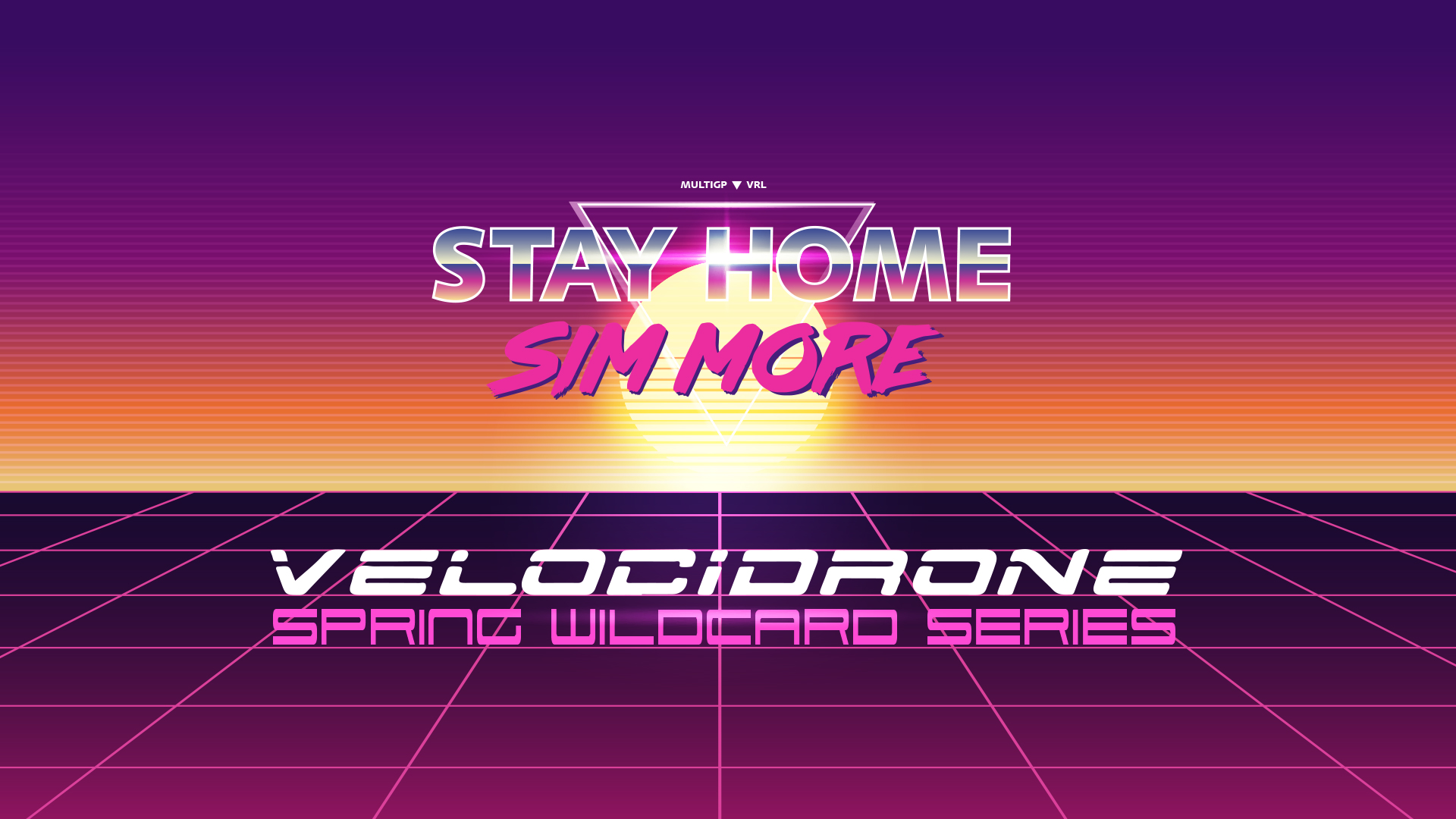 After 4 weeks of Qualifiers for the stage was set for the VelociDrone Spring Wildcard Series presented by MultiGP.

It was an early morning on the West Coast and the Championship kicked off at “High Noon” on the East Coast with a star-studded line-up of pilots competing in the VelociDrone Simulator in a top-24 battle for the top prize of a 2020 MultiGP Championship Wildcard Slot, and their share of $500 in store credit at RaceDayQuads.com

Similar to the most recent MultiGP Championship, it was an international roster of pilots competing. The Top-24 Qualified Pilots spanned from Mexico, Brazil, Poland and Canada in addition to all four corners of the United States. There were three new pilots to the MultiGP Championship Series realm. First, Mikołaj “Emmet_Brown” Kolasiński from Poland, who had qualified 2nd out of the six advancing on week 1 of qualifying. Then there was Heitor “waazzup” Teles from Brazil who was the week 4 winner, crowned earlier that week, along with Canada’s Eric “CruzE_FPV” Cruz who qualified 5th the same week as Waazzup. CruzE has been to the MultiGP Canadian Championship, however this was his first chance to qualify for the MultiGP Championship.

The 2020 MultiGP Wildcard Slot instantly advances a pilot to the MultiGP Championship where they compete at Champs along the rest of the field of qualifiers. If the Wildcard Pilot fails to make the Top-40 in the initial qualifying stage, they will advance to the second-to-last stage and compete against the pilots slotted 9th-40th for a final chance to make the Championship Top-16 at the 2020 MultiGP Championship. There were three pilots whom had qualified for the 2019 MultiGP Championship but weren’t able to attend competing in the VelociDrone Spring Wildcard Series presented by MultiGP for that second chance. Those pilots were Tyler “kroymander” Kroymann, 71st in qualifying for Sport Class, and two in the top-100 for Pro Class Qualifying, Akeem “Slice” Ayoad (90th on ‘the List’ in 2019) and Jon “FAERRY” Gaiser (83rd on ‘the List’ in 2019).

In similar fashion to the MultiGP Championship, each week featured a session of “leaderboard bashing”, advancing the top-24 into seeded into double-elimination brackets. As the top-6 from each of the four weekly qualifiers were advanced to the Sim championship, a qualifier session was held before the brackets. The top-Qualifier after the “leaderboard bash” was Beckett “Noical” Verrilli, the winner of Week #2, and the fan favourite on the HydraFPV race gamification platform as top-selection to win.

Into the brackets it was almost deja vu all over again for Noical. In the TBS Spec Series on VelociDrone a few months previous, and even during week #2 of qualifying on the VelociDrone Spring Wildcard Series presented by MultiGP, the Ironman option had eluded him by one race win. The Ironman Clause affords a quick path to winning for the Top-Qualifier. If they win all of their bracket races before the final, they have “Ironman Mode Engaged” into the Final Bracket Race (Final 6 in this case). At IRL MGP races (in real life) each bracket has the pilots racing once. Once the final race is up, the format flips to “Chase the Ace” where the final group of pilots race repeatedly until someone wins twice. As racing in VelociDrone eliminates all of the time spent retrieving drones, staging heats, lining up, etc., every match is “Chase the Ace” which ultimately means more heat wins required for the Top-Qualifier, but it was achieved in week #3 by Soren “phatkid” Monroe-Anderson. Once Ironman Mode is active for the Top-Qualifier in real life or in the Simulator, the Top-Qualifier is only required to win the first heat of the Final to end the event.

Noical started the Championship brackets with back-to-back wins in his first and second matches to advance to the semi-final of the winner’s bracket, but in the first heat of the match the streak was dashed. On lap one, Noical crashed through the start/finish gate, and though he went through the re-charge gate, Nickwasp took over the lead and held off the entire field, finishing 2-tenths of a second ahead of Chief, 8-tenths of a second ahead of Propsicle in third, and almost two seconds ahead of Noical. Noical won the 2nd heat of the match and then DrobotRacer won the 3rd heat of the match. Into the 4th heat of the match, Nickwasp, Noical and DrobotRacer each held a win looking for the 2nd win to end the match, and Noical took the win of the heat by just over 1-second over the entire field to get his second win. Joining Noical in the Final would also be Nickwasp and Propsicle at this stage.

The semi-final of the consolation bracket was key. The top-3 would advance to the Final, 4th and 5th would earn prize money via store credit at RaceDayQuads.com, and 6th would get a “virtual high-five”. The first heat of the match was intense, seeing Neon and Heitor finishing 1st and 2nd 6-thousandths of a second apart with FireSerpent, CruzEfpv Chief and Drobot finishing 3rd through 6th. The second heat saw a battle for the lead between Drobot and Neon for most of lap 3, with Drobot finishing 9-tenths of a second ahead of Neon in second place. Drobot was on fire, leading Neon by a gate the entire heat, finishing 6-tenths of a second ahead of him this time, putting both DrobotRacer and NeonFPV in the Finals, with CruzE joining them in 3rd. $25 at RaceDayQuads went to Heitor and FireSerpent for being 7th and 8th overall respectively, and Chief got the “high-five”.

After 4 weeks of qualifying, and 13 heats of the championship, The Final-6 Match was stacked.

From the consolation bracket, there was CruzeFPV who had qualified 5th in week 4 and was ranked 53rd overall in VelociDrone multiplayer activity; Neonfpv who was 2nd in week 2 of qualifying and 9th overall in VelociDrone lobby competition; and DrobotRacer, the winner week 1, the 5th overall ranked pilot in VelociDrone. From the winners bracket, there was PropsicleFPV, qualifying by placing 4th in week 4 and ranked 10th in VelociDrone and NickwaspFPV whom was 2nd in week 4 and ranked 18th in VelociDrone. And of course, Noical, the winner of the week 2 qualifier, the Top-Qualifer in the Championship, and #1 Ranked Pilot based on multiplayer activity in Velocidrone. All but one of these pilots competed at the 2019 MultiGP Championship, and all were gunning for the 2020 MultiGP Championship Wildcard Slot. Each were guaranteed at least $30 in store credit at RaceDayQuads.com, with the winner earning $100 along with the Wildcard Slot.

According to the HydraFPV gaming platform, most of the players had Noical as their selection to win, with DrobotRacer and Propsicle tied for 2nd on points.

Heat #1 saw a bunch of position changes for 2nd through 6th, with only CruzEfpv having the lead for a short time with Noical leading for the entire heat for the most part, and winning ahead of Nickwasp by 8-tenths of a second. Heat #2 was a whole different situation with almost the entire field taking a turn at the lead on the opening lap, but again with Noical leading for most. After lap 1, only one gate seperated the top-5 pilots. Noical started to gap the field on lap 2, and had an almost 1.5-second lead over the field by the end of lap 3 BUT CRASHED INTO THE START/FINISH GATE, giving DrobotRacer the win of heat 2. Into Heat 3, Noical redeemed himself, winning by 3-tenths of a second, giving him the second win required, and was crowned WelociDrone Spring Wildcard Series presented by MultiGP Champion, earned the 2020 MultiGP Championship Wildcard, and $100 in store credit at RaceDayQuads.com. 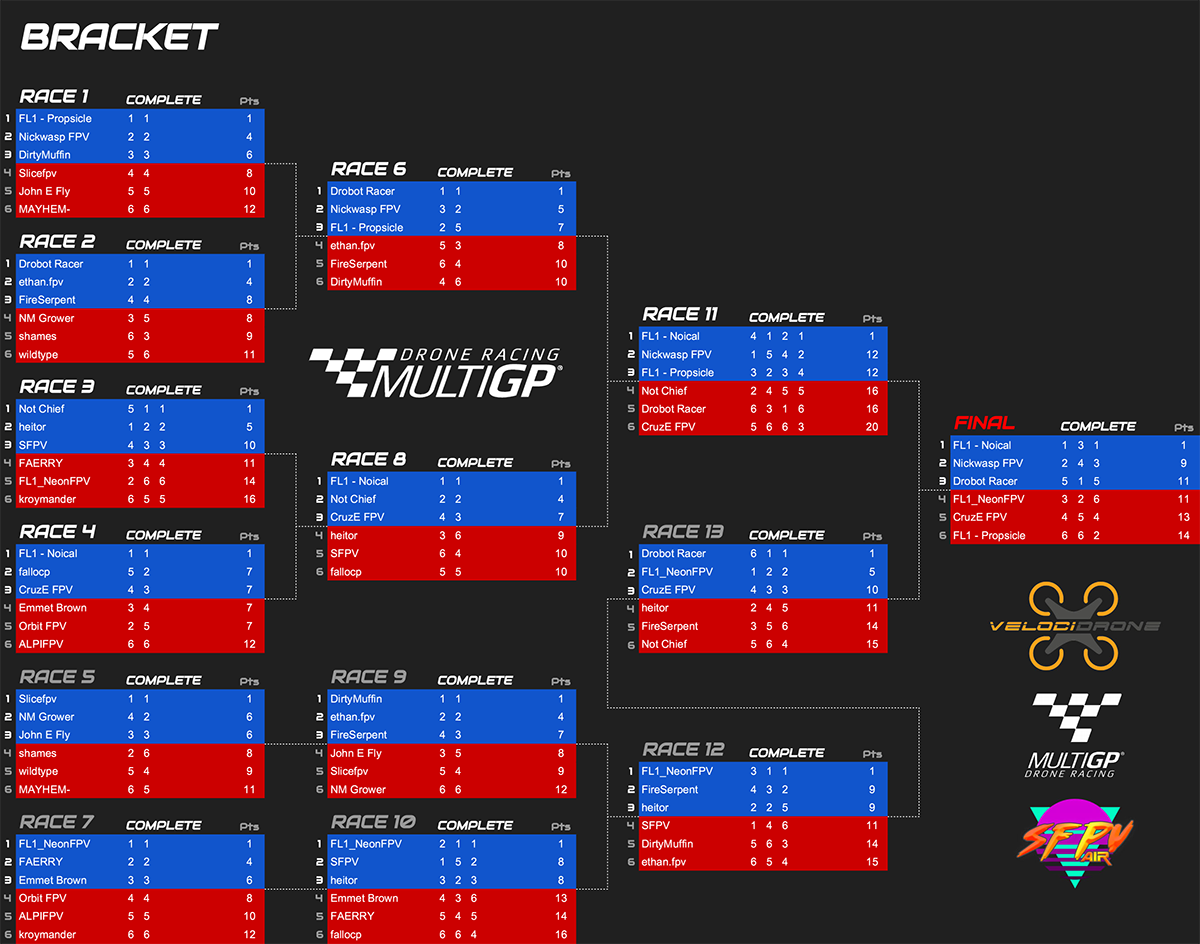 With over 120 pilots competing in the Series, the success paves the way for future official MultiGP VelociDrone Tournaments, stay tuned to MultiGP.com for more info as they are released.

Congratulations Noical, we look forward to seeing you back at Champs!

Re-watch the broadcast on the MultiGP YouTube Channel: https://www.youtube.com/watch?v=6jFZZCwLvZI
See all of the results from the Championship: https://www.multigp.com/races/view/?race=20208/Velocidrone-MultiGP-Spring-Wildcard-Series—Championship-Final