Last week the first-ever VelociDrone Spring Wildcard Series presented by MultiGP qualifier kicked off to launch the 4-week series.  Pilots from around the globe are competing in VelociDrone, the official SIM of MultiGP for their chance to earn a coveted Wild Card Slot at the 2020 MultiGP Championships plus additional prizes for top finalists.

With the new addition of the SIM as a partner, we are enjoying the interactive opportunity to watch pilots compete from the comfort of their homes on some of our favorite tracks.  40 pilots attempted to qualify during the event on the opening night, and with a Wild Card Slot on the line, we anticipate seeing many more pilots vie for their chance over the next three weeks.

The opening night was a throw-back to the 2018 Sebring Drone Race featuring the plane, 4-gate ladder, the excavator and other nostalgic features.  Remembering back to the IRL (in real life) event, it was a break-out event for Evan “HeadsupFPV” Turner as the Top-Qualifier, with the fastest lap of 19.1 on the track, a come-from-behind qualifier, and Thomas “BMSthomas” Bitmatta ultimately winning the final championship race.

After the hour of qualifying, the Top-Qualifier in the SIM event was Ashton “DrobotRacer” Gamble with a 3-lap time of 52.464 (averaging 17.5 seconds a lap), qualifying just 1.2-seconds ahead of Colby “SFPV” Curtola in second.

The top-24 pilots each week advance to elimination brackets, with the top-6 getting the invite to the Series Championship on Sunday, April 19th.  One of the benefits of SIM racing (practicing, training, competing) is the RESET button as most know, which in contrast to real-life races, eliminates a lot of the downtime between heats, thus allowing a top-24 double-elimination bracket to also feature MultiGP’s Chase-the-Ace format, each and every race group.  This means the pilot group races repeatedly until one of the pilots acquires two wins, and the rest of the positions are based on finish points. With 6 pilots per race group, the event can be comprised of anywhere from 23-98 heats, as a race group could potentially have 7 heats to decide a winner; making for some exciting battles among similarly seeded pilots. 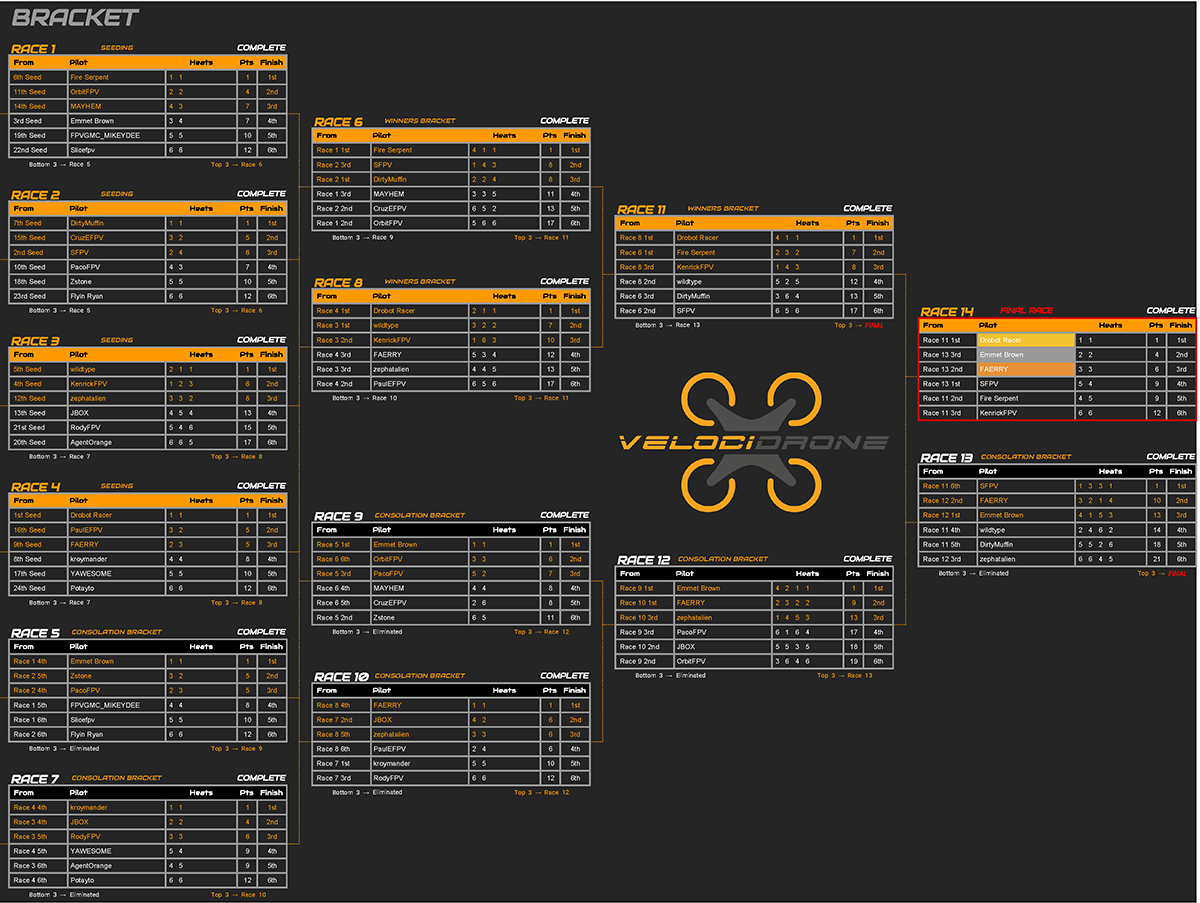 There were a few new competitors to the SIM competition, competing in their first set of brackets on a live stream, such as Michael “FPVGMC_MIKEYDEE” Husarik qualifying 19th and finishing in 22nd overall; plus a few staples like Charles “PacoFPV” Rinfret who was 2nd overall in qualifying during the weekend at the 2019 MultiGP Championship in Sport Class, who qualified 10th and finished 10th for the night in Velocidrone and Dominican pilot Rodimir “RodyFPV” Tavarez who qualified just ahead of the cut and worked his way to 15th for the night.

The HydraFPV Gamification app was in full effect, making it even more exciting for those racing and watching the livestream to game along and try to select the finish orders.  There were some big upsets on the Hydra Leaderboard throughout the night, with almost twice as many participants on the app than in the SIM.

Ashton “DrobotRacer” Gamble had an outstanding night.  He won 8 of his 10 heats in the eliminations to be crowned the first champion, and earn the first position at the series championship.  Joining him on Championship Sunday, April 19th will also be Mikołaj “Emmet_Brown” Kolasiński, Jon “FAERRY” Gaiser, Colby “SFPV” Curtola, Mitchell “FireSerpent” Biehl and Kenrick “KenrickFPV” Suyanto.

Tonight, March 31st brings the 2nd week of qualifying, it’s open to the World and is your chance to race against some of the best pilots in the SIM and experience as near to a live race experience as possible.  The track will be released as qualifying starts at 8pm EST / 5pm PDT tonight, with the elimination brackets and livestream commencing just past 9pm EST / 5pm PDT on the VelociDrone Racing League Twitch Channel: http://Twitch.tv/velocidroneracingleague featuring VRL Pilot and Streamer SFPV along with MultiGP’s renown Race Director and Commentator Joe Scully.  All of the information on how to join is on the MultiGP RaceSync page: https://www.multigp.com/races/view/?race=20205/Velocidrone-MultiGP-Spring-Wildcard-Series—Race-2

See all of the results from Race #1: https://www.multigp.com/races/view/?race=20196/Velocidrone-MultiGP-Spring-Wildcard-Series—Race-1

Join us tonight for Race #2 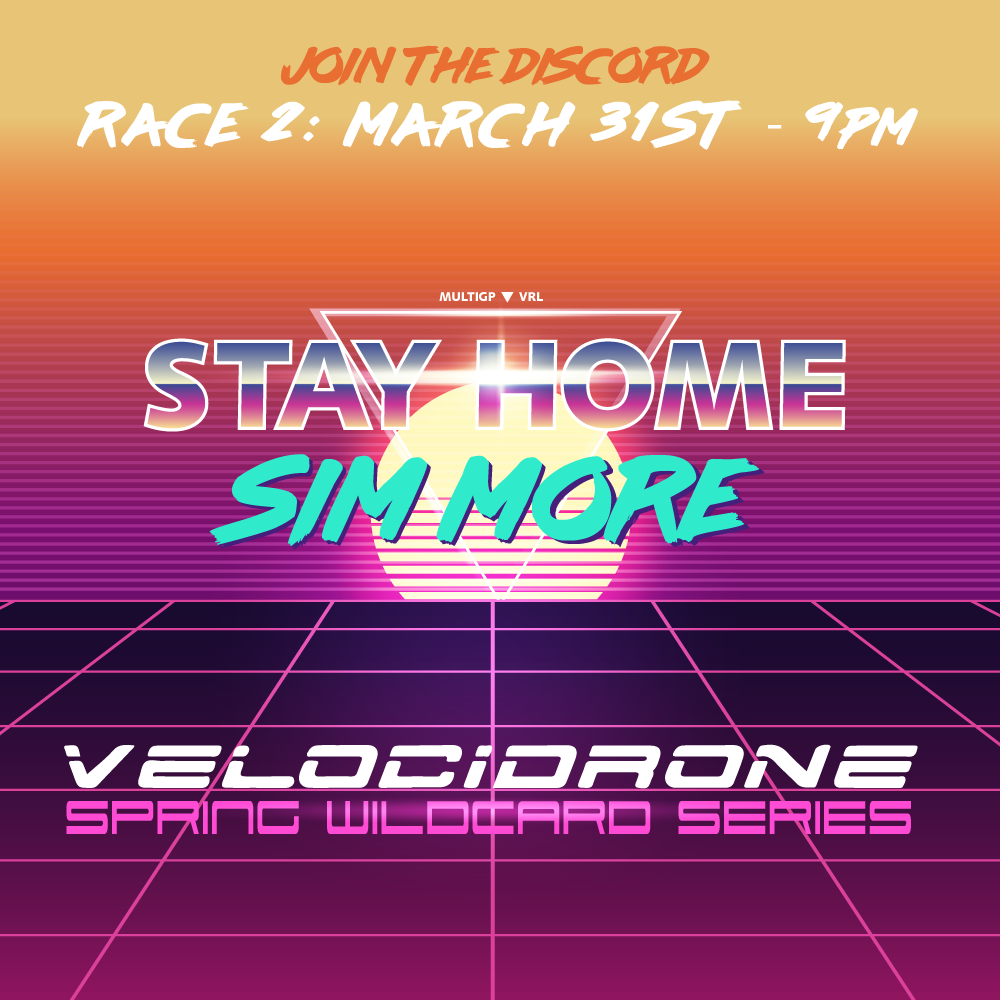