March ended with the 2nd qualifier of 4 for the VelociDrone Spring Wildcard Series presented by MultiGP.  Hosted Tuesday evenings by Colby “SFPV” Curtola and Joe Scully, the month-long series is the first tournament hosted within a SIM allowing pilots to vie for a Wildcard Slot at the 2020 MultiGP Championships.

Almost 50 pilots attempted to make the qualifying cut for top-24 elimination brackets and ultimately one of the final 6 slots to advance to the series championship April 19th.  While there were some staple VelociDrone tournament staples such as Beckett “Noical” Verrilli the top-qualifier for the most recent TBS Spec Series, Jonny “NeonFPV” Exner and Mason “Hyper” Lively; there were some new contenders in the tournament from the 2019 MultiGP Championship like John “JohnEFly” Chapman and a 2019 Wildcard recipient Ethan “ethanfpv” Kling among others.

Gabe “IQ0” Barrasso was the top-qualifier from the leaderboard bashing hour on the “throwback” 2019 MultiGP Championship Pro Class Track; while the 2019 MultiGP Champion Evan “Headsupfpv” Turner posted a qualifying time of 56.0 on the authentic track in 2019, IQ0 was about a second-a-lap faster for the TQ spot on the track in the SIM for qualifying.

Through the double-elimination chase-the-ace brackets the the competitors went, racing each group of six pilots until someone won two heats.  Most match-ups went 3 rounds for the most part until eliminations were made. Moving forward to the Series Championship along with Noical is Jonny “NeonFPV” Exner, Gabe “IQ0” Barrasso, Mason “Hyper” Lively, Nicholas “DirtyMuffin” Knickerbocker and Akeem “Slice” Ayoade

For the second week in a row SFPV won the HydraFPV Fan Leaderboard contest with an almost record-setting 409,000 Points after starting with 5,000; however he lost prizes instead of earning them.  During week 1 Scully offered a vintage never-worn FPV ballcap as a prize, which SFPV won. However, during week #2 during Scully’s favorite match-up of the bracket, he claimed, “no-one will be able to correctly guess all six pilots’ finishing order… no way, no how…” and convinced SFPV to re-donate the earlier mentioned ballcap as a prize, while Scully added additional prizes from the prize closet to the purse.  Of the 20+ players, “FunPolice”, better known as Jeff “Jeffx” Exner, or “Neon’s dad” was the only one to select all six correctly and won the prize.

There are two weeks remaining to fill the final 12 spots for the Championship.  It’s free to join, just sign up on MultiGP.com for all of the details and notifications when the track goes live for qualifying (at 8pm EDT / 5pm PDT).

See all of the results from Race #2:  https://www.multigp.com/races/view/?race=20205/Velocidrone-MultiGP-Spring-Wildcard-Series—Race-2

Join us next Tuesday Night, April 7th for Race #3: 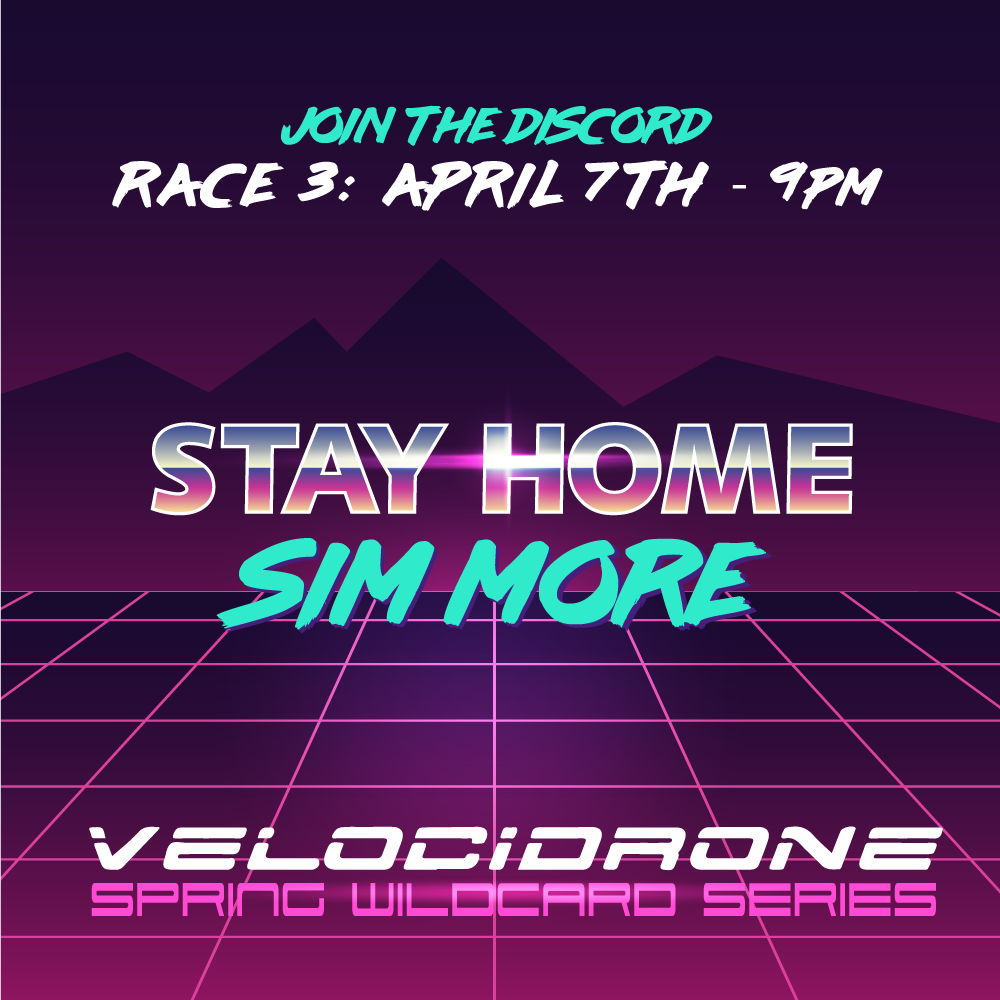