Into the final week of Qualifiers for the VelociDrone Spring Wildcard Series presented by MultiGP had the stage set with 18 of 24 positions filled for the Championship, and on April 14th, 26 pilots competed during the last qualifier in the simulator for the remaining 6 spots. All told, just over 120 pilots had competed in the series, with the 4th week seeing the largest field in the “leaderboard bash” consisting of 47 pilots. At the end of the night, the top-6 would advance to Championship Sunday to compete in the top-24 battle for the 2020 MultiGP Championship Wildcard Slot, and their share of $500 in store credit at RaceDayQuads.com

The top-qualifier by almost 2-seconds over the field was Silas “Propsicle” Aaron from Illinois. In 2019, he had qualified in the #5 spot on the Global Leaderboard and finished 10th at the 2019 MultiGP Championship in Daytona Beach, Florida. Propsicle was definitely a serious contender that could use the extra benefits of a Wildcard slot at Championships, but his potential journey to Champs in the SIM would still not be an easy feat.

Propsicle won his first three Matches in the minimum of 2 heats each in the super-charged “Chase-the-Ace” format every match where the six pilots in the match race repeatedly until a pilot earns two first-place finishes. But in the semi-final, he would eventually be bested by Alex “Chief” Campbell of Tennessee. Chief is another veteran pilot who finished top-30 at the 2019 MultiGP Championship, while ranking right behind Propsicle on the Global Leaderboard in 8th. In the Wildcard Qualifier #4 Semi-final, Chief won two of the three heats while Propsicle won one. Both advanced to the Final Race, but the notable preface was that Propsicle was about to face a stacked group of Pilots.

The final featured John “JohnEFly” Chapman whom had just missed qualifying in the sim series the week before by one position, Chief, Propsicle and Nick “Nickwasp” Lee; all meeting in the SIM 6 months after competing against each other at the MultiGP Championship in Daytona. Plus, two new contenders, Eric “CruzE_FPV” Cruz from Canada and Heitor “waazzup” Teles from Brazil.

Propsicle won the first heat in the finals, however Heitor would become hero of the game, winning the second and third heats to be the Week #4 Champion. All six pilots, of course are moving to the VelociDrone Spring Wildcard Series presented by MultiGP Championship, with the final finish ranking comprised of JohnEFLy in 6th, CruzE in 5th, Propsicle in 4th, Chief in 3rd, Nickwasp in 2nd and Heitor at the top of the podium.

Week #4 was a an upset for the twitch broadcast producer and co-host Colby “SFPV” Curtola, his HydraFPV leaderboard winning streak of 3 for 3 during the series as fan player “Groovy” won in finish-order gamification by selecting Heitor to win! 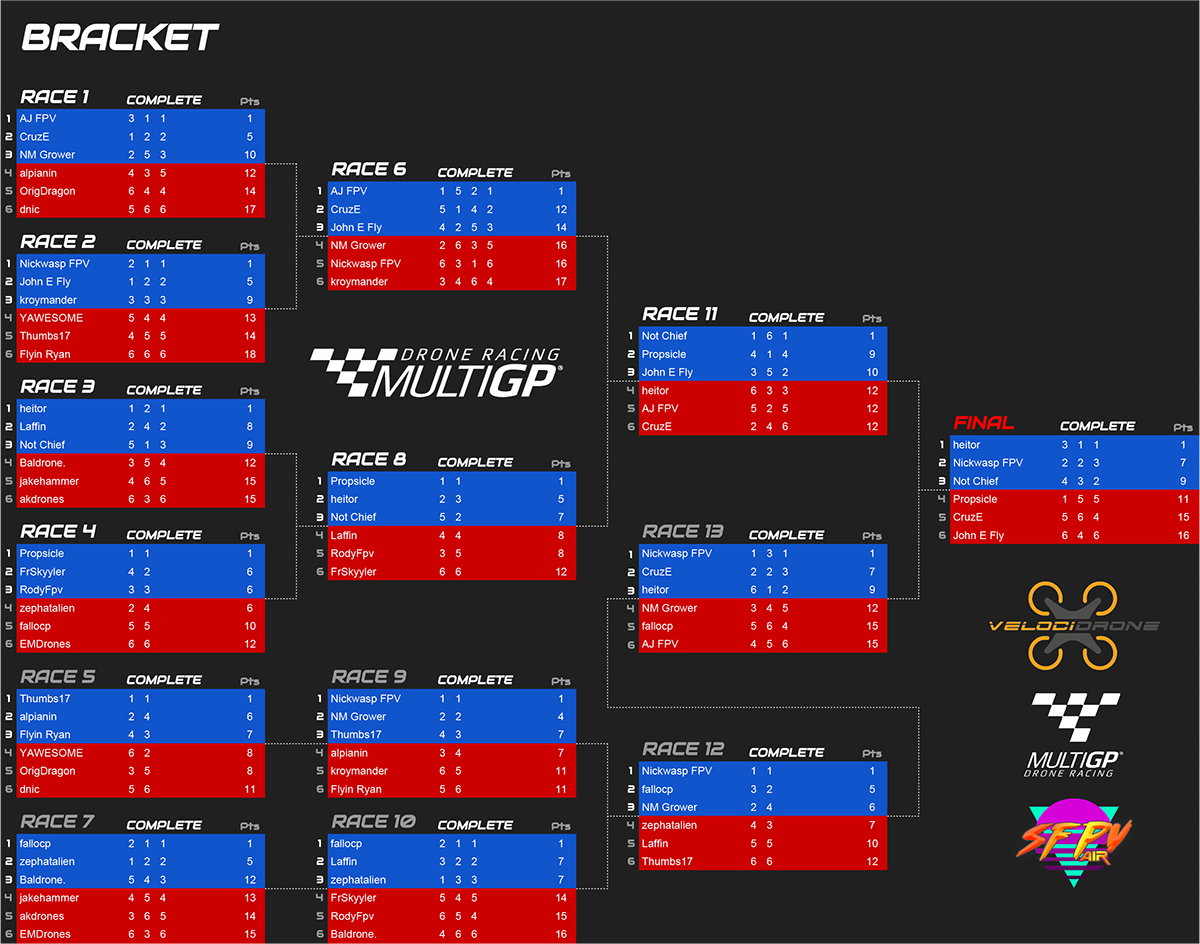