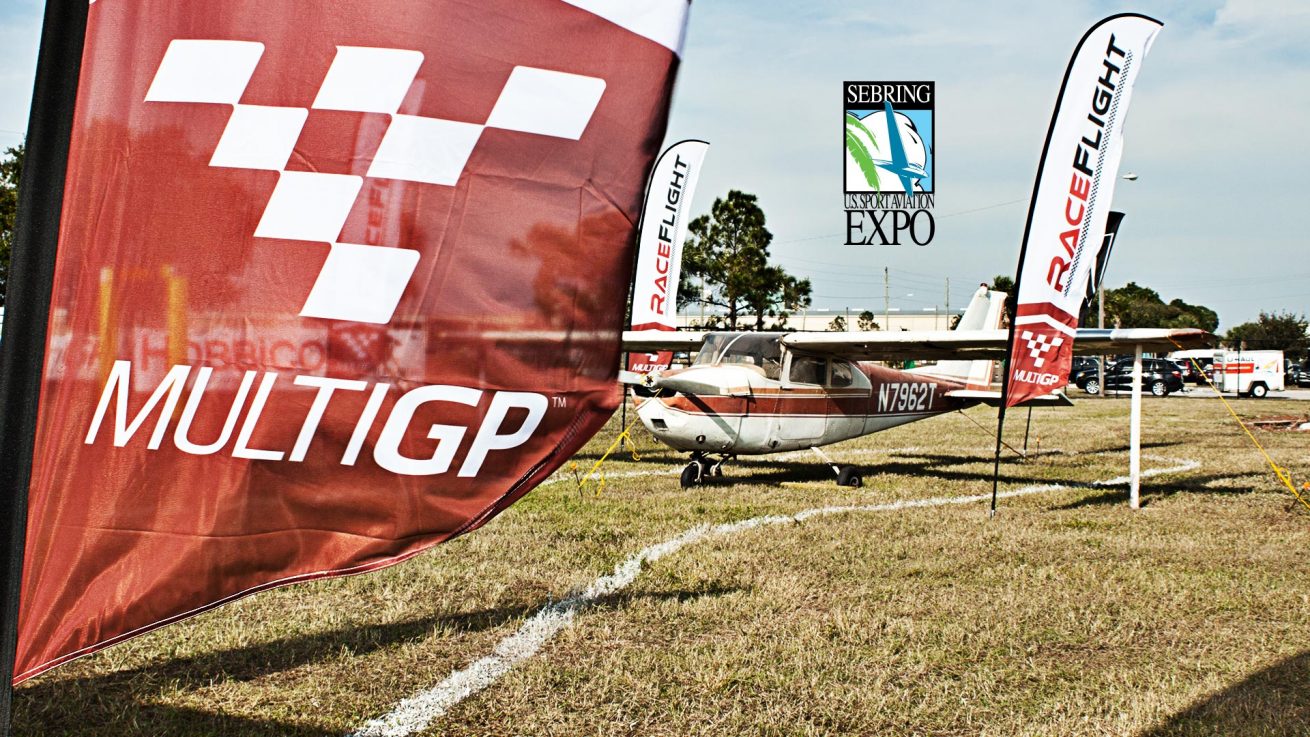 Over 100 of the fastest FPV drone racing pilots converged on the U.S Sport Aviation Expo in Sebring, Florida last week for the Sebring Done Race 2017. This MultiGP sanctioned event had one of the largest prize purses (over $20,000) seen at a drone race, with a $10,000 cash first place prize. FPV pilots from as far away as South Africa attended the race for a chance at a podium spot.

The action got started as the pilots converged on Sebring for practice rounds, giving them ample opportunity to become familiar with the track. Much thought was put into the construction of the unique track that pilots competed on; from spectator areas, to track obstacles, this event was set up to entertain both the competitors and those watching the action. Gates, pylons, and even a few full sized airplanes were among some of the obstacles the pilots flew over, under, and around. The track also navigated over and around the completely netted in pilot/spectator area, putting those in attendance directly in the action! In the spectator area were also multiple monitors, large screen TVs, and a huge projector screen, allowing people to see what the pilots see as they pilot their drones at eye-watering speeds. For those not able to attend, FPVLive.tv broadcast a live stream of the entire event, allowing everyone around the world to tune in to the drone racing action.

One thing that was apparent from the beginning is that drone racing is no longer a “Men’s Only” sport; we are seeing more competitive female pilots like Jamie “Bluejay FPV” Bonn, Megan “Drone Doll” Proulx, and  giving the guys a serious run for the podium. MultiGP also saw some Young Guns come into town for the Sebring Drone Race. Ashton “Drobot Racer” Gamble, the 11 year old phenom who took 2nd at IDE, almost made it to the finals. 2017 is sure to be the year to keep an eye on these up and coming pilots.

The action was nonstop from the beginning of practice rounds; the mood was friendly and light, but you could feel a buzz in the air due to the size of the purse. A $10,000 1st place is rare in drone racing, and every pilot brought their A game because of it. The pilots thrilled spectators, both in attendance and on the FPVLive.tv stream, with their skill and piloting ability. Crashes, near misses, and pilots’ passing each other going through the gates, had those watching the action cheering with excitement. As practice rounds gave way to qualifying rounds, the pack began to narrow down. Going into the Finals were the best of the best; these pilots overcame close to 100 of their fellow pilots, proving they had what it takes to go for the podium. When the dust settled after the final race, three pilots took the podium. Taking First Place, and the $10,000 prize, was Cain “Mad-Air” Madere. Second place, and earning a $4,000 prize, was Zach “FALCONX” Carlson. Chris “GARZ” Garza won 3rd place and $2,000.

This was also a chance for MultiGP and the sport of drone racing to share our professionalism with the Federal Government. Because the event was held at an active airfield, the Sebring Drone Race 2017 was also attended by members of the FAA, who were there to see how MultiGP conducts safe and entertaining drone races. One thing that MultiGP prides itself on is its knowledge of and respect for laws and regulations, as well as our unblemished safety record. Being able to share this firsthand with the FAA brings us closer to a mutually beneficial relationship between the two groups, further helping to legitimize drone sports in the United States and abroad.

The event was an overwhelming success, not only in the eyes of the pilots, but in the eyes of spectators and event organizers alike. The Sebring Drone Race 2017 was further proof that drone racing is safe, exciting, entertaining, and here to stay!