A Triple Header, Two Double Headers and Three Global Qualifiers take the List to over 520!

July 13th and 14th was the biggest weekend to-date for the 2019 MultiGP Series with 10 Global Qualifiers adding 75 new pilots to “the List” and seeing 36 pilots return to the GQ Track with 25 of them improving earlier times.

Three Global Qualifiers over 2 days kept pilots in the Spokane, Washington area flying pack-after-pack with 15 chances to post their fastest-consecutive three laps. Christopher “fpvCH” Hartman was the highest ranked pilot at all three events hosted by Treasure Valley MultiGP, FPV Palouse and Spokane FPV, while his best score of 42.83 fastest-3 consecutive laps happened in GQ #3, Round #4 following a 14.2, 14.2, 14.3 run on laps 3-5 on a 76-second, 5 lap run. That moved fpvCH up 7 spots to #16 in the World on “the List”. 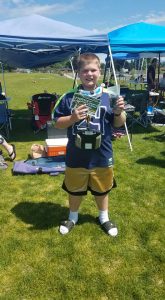 The triple header also moved 8 pilots in the up or into Sport Class and 6 up or into in the Pro Class divisions. Daniel “AbsoluteMayhem” Muir starts his season off in the #2 spot in Sport Class after launching with a 62.5 fastest-3 consecutive laps score during the triple header weekend, Ashon “AshonFPV” Bristol flew the GQ track for the first time and landed himself in the #60 spot on the Global Qualifying Ranking with a 48.2 score, and Nick “SHERMANATOR” Sherman took himself from just outside of the top-100 to 63rd with a 48.3 score. 12 year-old Lucas “Lucas_Gilmore” Gilmore competed in his first Global Qualifier and kicked off his season in the #122 spot in the Pro division after posting a 53.8… look out leaderboard, more young pilots are climbing the ranks!

Meanwhile in Contati, California 415FPV and #TeamBaylands hosted a double-header for about 25 pilots to have 10 official packs on the Global Qualifying Track, wrapping up into a caravan to a restaurant for a patio party. Mitchell “Kyosanym” Tuazon moved from just beyond the Sport Class bubble to 62nd in Sport Class with a 73.7, while Chris “CBudd” Budd, Ollie “OKFPV” Krause, Ray “Qwadfather” Ross and Tommy “Tombo” Rico slid into the Sport Class Division on their first outing on the GQ Track, while Christopher “two_scoops” Brown moved up 10-spots to 8th in Sport Class. Michael “WoooSaaaW” Fone moved from Sport Class to Pro Class with a 61.5 seeding him in the 192nd position in Pro, while the highest locally ranked Skip “HawkFace” Rey used the second qualifying event to move from outside of the top-50 to inside the top-25 of Pro Class with a 43.8 fastest-3 consecutive.

Over to sunny-Florida, Starke UAV Pilots Club and Wolfpack Racers also hosted a double-header this past weekend. Just over 25 pilots ran the GQ Track 10 times officially with most of their official times arising in the 2nd qualifying event as well. Eduardo “Shake-n-Bake” Oyola was the highest seed in Sport Class with a 63.6 to be 13th in the division currently, Zach “Zix” Herrick in 20th along with Joshua “UKNOWN-X” Crane and Nathan “DarkwingDuck” Menke starting in the top-100 in Sport Class. The fastest on 3-consecutive over both Florida events was Mason “Hyper” Lively, competing in his first Global Qualifier and breaking the top-10 in his first outing. His time of 41.27 consisted of a 13.5, 13.6 and a 13.9 on a rare 3-lap run. Also making big strides in the Pro Class was Daniel “Danimal_FPV” Hubert with a 43.5 to be ranked 19th Globally, Nicholas “DirtyMuffin” Knickerbocker who moved up 24 spots to be 25th with a 44.3, Christopher “FLYKUX” Bevan and Randel “Daleflyz” Pike both starting their season in the top-50.

Back to the west coast, RC88 hosted their Global Qualifier at Bob Swenson Memorial Field in Silverado, CA, with many pilots at their first Global Qualifier of 2019. Derek “Slayton” Slayton, Scot “Nope” Woolums, christopher “DZDrones” davis and Hilgard “Hill” Querubin all start the season ranked 15th, 18th, 53rd and 81st respectively in Sport Class, while JEFFREY “SurfGuruJeff” RUSSELL, John “J_DREDD” Mora, Seth “Rotorhead5” Fener, John “Roar” Rohrssen, Reggie “R3” Ramos, Zachary “PiMan” Rodenbucher and Thi “TheMilkMan” Van all kick off their season inside the top-200 ranking them Globally in the Pro Class. Meanwhile, Brady “Laffin” McLaughlin used the event to jump 36 spots into 39th with a 45.9 and Andy “DolmaFpv” Marachilian climbed almost 50 spots into 15th with a 42.6, the third fastest effort from the entire weekend worldwide.

It was a second global qualifier for Palm Beach FPV in West Palm Beach Florida. Most pilots were already ranked strong on the Global Qualifier Ranking Leaderboard and weren’t able to improve on earlier efforts, however Lucas “LucasFPV” Gandarillas was able to break the top-75 in Sport Class currently with a 68.7-second fastest-3 consecutive lap run during his first official Global Qualifier.

And also hosting their second Global Qualifier of 2019, RatRaceFPV returned to Magna Field in Gormley, Ontario, Canada. Eli “Bull-Fpv” Abitbol, one of last year’s Wildcards to the championship, moved up 10 spots to the 11th position Globally with a 42.3-second effort following a 14.1, 13.7, 14.4 on laps 1 through 3 on a 4-lap, 59-second effort. Ben “bennymack” Bixby and both Jorge “trojanGoat” Razon had stronger efforts at the second qualifier to improve their times to remain around the 100-mark, a decent place to be in with 17 weeks of qualifying down and just 7 weeks to go.

The Top-Qualifier still remains as Evan “headsupfpv” Turner, the reigning MultiGP Champion. His 35.7 (or 11.9-seconds a lap) remains untouched for 8-weeks!

Coming up this weekend there are THIRTEEN qualifiers scheduled, including a Quadruple Header in Texas (Quad-header!), a Triple Header in New Hampshire, A Double Header in Ohio, plus qualifiers in Minnesota, Oregon, Maryland and the first 2019 Global Qualifier in Mexico!